How to talk finance with your congregation

How to talk finance with your congregation 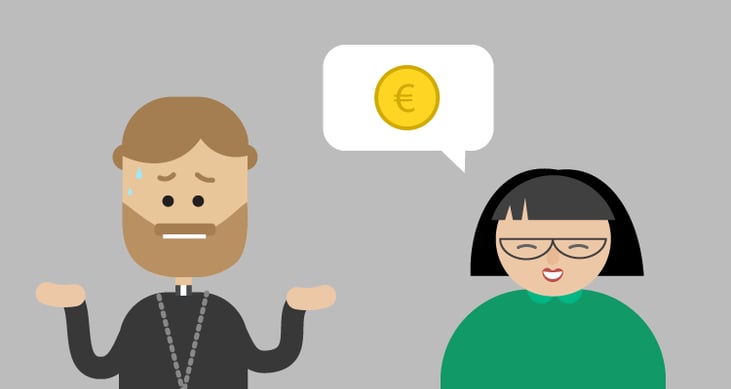 Tim Gibson seeks expert advice on the best way to encourage regular giving among congregations, including the strategic use of technology

Ask your average Church of England congregant to speak about money and you’re unlikely to meet with a positive response. My experience in parish ministry is that people would sooner talk about pretty much anything other than finance, including sometimes their sex lives, and that even broaching the topic leads to instant hostility.

The Rev’d Patrick Parkes, a former Pentecostal pastor who is now Team Rector of Newton Abbot Benefice and Team Ministry in Devon, gives a convincing explanation as to the origins of the C of E’s awkwardness around money. He says it’s because of the denomination’s history as a church that was funded centrally.

“The Church of England hasn’t needed to prioritise giving among members until very recently,” he observes. “The Church was traditionally funded by agricultural tithes, various forms of patronage, and the returns on significant assets. The Church Commissioners met the cost of clergy stipends, and local congregations maintained the buildings and cared for the poor of the parish through their weekly offerings.”

Now, however, the financial situation of the established church has changed. “Over the last 40 years the burden of stipends and pension contributions has shifted from central funds to local congregations,” Patrick continues. “This runs counter to the historic culture of the church, and means that priests often feel awkward and ill-prepared to talk about the topic of stewardship.”

Establishing a “culture of generosity”

As a former Mission Resources Adviser for the Diocese of Exeter, Patrick speaks with some familiarity, not to mention authority, about this topic. His job was to raise the profile of stewardship in contexts where congregational giving was poor, helping to establish what he describes as a “culture of generosity” throughout the diocese.

“When the topic of finance is introduced, it is usually in extremis, so [contributing to the church’s financial wellbeing] comes across as an obligation rather than a joy and privilege. Allied to a sense that clergy numbers are being slashed because of insufficient funds, the result is resentment and a sense of loss, which is a further disincentive to regular giving.”

All of which makes for a depressing picture if you’re an Anglican priest who needs to encourage church members to pay their way. And by the time you factor in the older age profile of many worshippers, meaning they have less disposable income than those who are still earning, it may seem even harder to ask for their financial support.

Fortunately, Patrick thinks there are ways to bring up the topic that keep congregation members on side, and may even encourage a joyful embrace of giving. Drawing on his free-church background, he says stewardship should be seen as part and parcel of a life of discipleship, and therefore as something that is routinely practised by faithful Christians.

“The careful and generous use of resources is a biblical principle,” he states. “Added to that, congregations should have a shared sense of ownership over their church, and a desire to see it flourish. This in turn builds vision and confidence, encouraging people to give in support of their church’s mission.”

What is more, Patrick calls upon C of E parishes to “model and celebrate generosity” in the manner of the Apostle Paul, seeing regular giving not just as a means of supporting their churches, but as an outworking of their faithfulness to Christ.

So much for the theological and practical arguments in favour of giving. Few would deny their force. The next question Patrick addresses is how to encourage congregation members to give regularly, and thereby make an ongoing contribution to their local church’s financial stability.

“Technology can play a helpful role in making it as easy as possible for people to support their local church,” he says. “There are all sorts of schemes, including the Parish Giving Scheme that was pioneered in the Diocese of Gloucester but is now rolled out across a number of dioceses. This involves the giver setting up a direct debit, while the scheme claims the gift aid and gives the whole sum to the church.”

While schemes of this ilk provide a helpful infrastructure to facilitate regular giving, they don’t do much actively to encourage the habit of donating. This is where more cutting-edge technology can help, such as ChurchDesk Payments & Giving.

“By including a donation button on your church’s website, you keep stewardship visible to your congregation members and wider community,” says Christian Steffensen, Founder and CEO of ChurchDesk. “More than that, it’s so easy to click on the button and set up an electronic payment that people often just get on and make their donation. But if donations can only be made off line, there’s more opportunity for people to forget, or simply change their mind.”

Christian likens it to spending money with an online retailer: “If you see something you like online and can purchase it easily, there’s a high chance you’ll do so. It’s exactly the same with supporting your local church. Make it easy for people to give when they’re on your website, and you’ll have every chance of increasing donations.”

Patrick Parkes agrees, saying that instant transfers of cash have a clear role in contemporary church giving. “New technologies that are perhaps more suited to younger and more tech-savvy members of our congregations are now being trialled in a number of churches,” he says. “In an increasingly cashless society churches can promote giving via instant cash transfers using a debit card or smart phone. That’s surely the future of regular giving among church members.”

Given the dire financial situation of many C of E parishes, we certainly have to hope technology such as this encourages an increase in giving. If not, clergy look set for many more years of awkward conversations. Not to mention any number of surprising revelations about their congregation members’ sex lives.

Dr Tim Gibson is a UK-based journalist, writer, priest and theologian. He has published books and papers about rural ministry, Christian ethics, and philosophy, and writes regularly for The Daily Telegraph. His parish ministry is in Somerset, and he has trained ordinands and lay ministers in the Church of England, Methodist Church and United Reformed Church.

Imagine you spend weeks planning a youth event at your church, only for no one to show up. Or envisage countless hours dedicated to organising your Ch...

A ChurchDesk Guide: How to Create a Successful Church Event

Here at ChurchDesk we’ve come up with some top tips to help facilitate great church events. Whether it be an Easter camp, Christmas service or social ...

When a contact submits new data you can easily update their profile in ChurchDesk People. We’ve recently updated our forms to help you keep your conta...